On 9 December 2020, a large tidal flood hit the villages in Demak, a coastal district in Northern Java. The incoming mud waves ruined a primary school, community houses and aquaculture ponds. IADC decided to support the villagers with immediate relief needs through the Building with Nature Indonesia project led by Wetlands International and EcoShape.

Demak is since 2015 supported by the Building with Nature Indonesia project to repair its mangrove forest to stop coastal erosion. But to protect villagers for the long term against flooding and storm damage, excessive groundwater extraction that causes the land to sink must be addressed urgently. 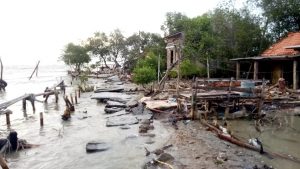 Extreme weather conditions with high waves usually occur in Demak at the end of the year and coincide with the arrival of the rainy season. But in 2020 the flooding conditions lasted until February 2021. Emergency assistance by the local disaster agency and the Indonesian Red Cross already came in for food support, sand sacks to protect against the waves and tarps for rain protection. But more support is still needed to repair houses, schools, bridges and village roads.

The primary School in Bedono village which was totally ruined as the tidal flood transported mud into the classroom school rooms and broke everything on its way.

In addition, many villagers lost their main source of income as the tidal flood inundated their aquaculture ponds which damaged pond dikes and caused harvest failure. Apri Susanto, Wetlands International Indonesia: “This is why the €5,000 donation from the International Association of Dredging Companies  is very welcome, as it allows villagers to repair their damaged ponds and buy new milk fish or shrimp seeds so that they can return to their aquaculture activities in the ponds”.

The funds from IADC will be channelled to 9 villages through community groups that were already assisted through the Building with Nature programme in Demak to apply environmentally friendly aquaculture techniques in ponds behind restored mangrove belts. These best practices, which were introduced through Coastal Field Schools, are highly successful as they protect the mangroves, but have also boosted aquaculture productivity and tripled local incomes, motivating farmers to continue and upscale this approach.

“As the global association for the largest private dredging companies, sustainability and combating coastal erosion are high on ours and our members’ list of priorities”, says Rene Kolman, Secretary General of IADC. “The dredging sector recognises the great importance of working in a sustainable way and is for example pioneering nature creation making use of sediments dredged to maintain access of port channels. It is heart-breaking to see how natural disasters affect people, nature and the economy. We hope that with this donation we have been able to make a small contribution to the reconstruction of Demak and the important work of the Building with Nature programme.”

The Building with Nature project in Indonesia also managed to halt coastal erosion by constructing temporary permeable structures in front of the coastline to dampen the waves and capture sediment. Once the near shore bed level rises enough, mangrove will regenerate naturally, protecting the hinterland from further erosion. Where the coastline was not yet been eroded, the project encouraged the conversion of ponds into mangrove forests in close collaboration with local communities, which was also highly successful.

But while erosion was halted with the permeable structures, mangroves were not successfully restored behind the permeable structures because rates of subsidence, proved to be too high. In Demak this is caused by excessive extraction of groundwater to meet the demands of industrialisation and the growing urban population in the neighbouring city of Semarang, affecting the entire coastline of Demak and further deterioration the conditions for local communities. 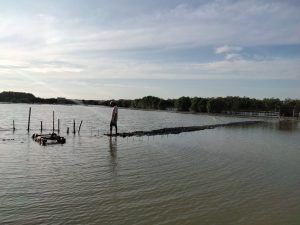 Therefore, to prevent even more damage from storms in the future, groundwater withdrawal problems need to be resolved urgently to accompany coastal restoration efforts in Java. So far, however, all levels of government in Indonesia have found it difficult to address groundwater withdrawal. Partners in the Demak project managed to put this topic on the national agenda, leading to the creation of a presidential task force and the adoption in 2019 of a national road-map to mitigate subsidence. The initiative is working with Central Java Province to translate this into a provincial road-map, backed up by a risk assessment conducted by the project for the north coast of Java that signals opportunities for Building with Nature solutions as a cost-effective way to mitigate flood risk in rural areas.

All photos in this article are provided by Wetlands International.

For more information about Wetlands International and EcoShape, click on the buttons below.