Over nearly 50 years of publication, Terra et Aqua has benchmarked innovative maritime solutions through more than 150 issues. Articles are available here as well as in IADC’s Knowledge Centre. 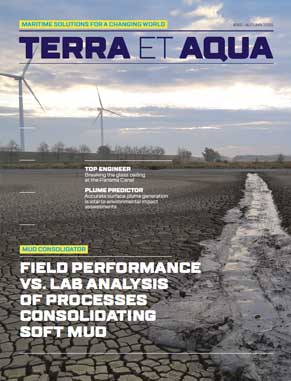 Authors: Dr Alex Kirichek | Ronald Rutgers
As regular maintenance and relocation of sediment deposits are highly expensive, Port authorities seek more efficient solutions for reducing the costs and CO2 emissions of maintenance dredging. One solution, water injection dredging (WID), is carried out for maintaining the sediment deposits which predominantly consist of clay and silt. WID has been proven to be a cheaper solution by leaving the sediment in place, eliminating substantial costs for relocation of the dredged sediment.

Armed with degrees in both Marine Engineering and Engineering Economics as well as 35 years – and counting – of experience at the Panama Canal Authority, Ilya Espino de Marotta has blasted through the glass ceiling wearing a pink hard hat. Amongst the diverse roles she has under her belt, ranging from Marine Engineer in the shipyard to Vice President for Transit Business, Ilya has notably led the Canal’s expansion as head engineer and now oversees operations from the second highest position at the authority. 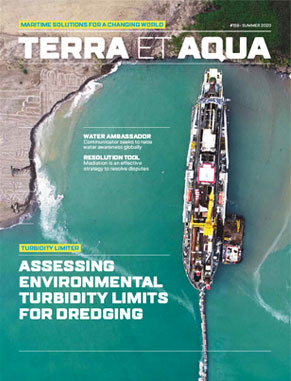 Mediation 101 for the Dredging Industry

Authors: Anthony Trace | Erik van Wellen
The international dredging and maritime construction industry remains quite devoid of the use of mediation as a tool for Alternative Dispute Resolution. Mediation is outlined to broaden familiarity with mediation, increase confidence in the process, and inform about the benefits it can bring to the industry at large.

‘Water is more than a toilet, tap, dam, dyke or levee, it's an enabler.’

Authors: Klavs Bundgaard
Dredging is essential for the maintenance and development of ports, harbours and waterways to allow for safe navigation, remediation and flood management. The process, which relocates large volumes of sediment, can be accompanied by the release of suspended sediments into the water column referred to as sediment plumes.
Read more 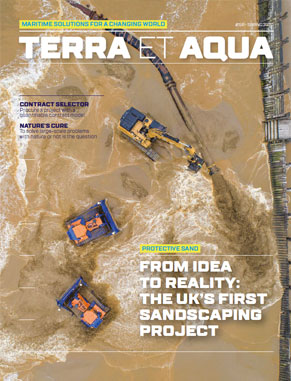 Managing risks: how to select the appropriate dredging contract

Authors: Charles Wilsoncroft
Contracts for dredging and offshore works are diverse. Moreover, increasing financial and/or managerial constraints require contracting parties to change the apportionment of commercial risk. Contractors and suppliers have to adapt to contracts that are chosen unilaterally by the owner. Turnkey and engineering, procurement, and construction (EPC) contracts are becoming more common in the industry and bring their own benefits and challenges.

Authors: Frederik Mink | Paris Sansoglou
Can nature-based solutions be mainstream solutions? Nature-based solutions have obvious advantages but have not been embraced at wider scale. The barriers which can hinder wide-scale application and the topic’s relevance to the dredging community are discussed.

From idea to reality: the UK’s first Sandscaping project 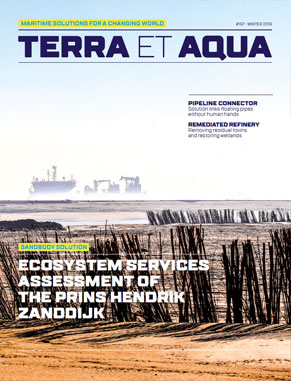 The nomination which won the IADC’s Safety Award 2019 was unveiled at IADC’s Annual General Meeting in New Delhi, India.

Authors: Kevin Kowalk | Steven Shaw
Situated in Muskegon, Michigan, the project provided numerous environmental benefits related to the remediation of legacy sediment contamination as well as restoration of the habitat into a more diverse wetland system. 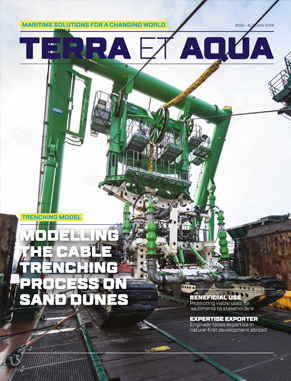 Authors: Cees van Rhee | Connie Visser | Cristina Lupea | Sape Miedema | Sjoerd Warringa
Cables for offshore wind farms in the North Sea are buried for protection. A highly variable seabed topography influences the trenching process in sandy soils. A model has been developed to estimate the influence of sand dunes on the trenching process.

After 30 years at Witteveen+Bos, Henk Nieboer has moved on from the engineering and consultancy firm to focus his expertise into his current roles as director of EcoShape and founder of Adaelta.

14 innovations face off for Safety Award 2019

Each year, IADC gives a safety award to one exceptional innovation which proves it is the best in its class. This year, 14 innovations addressing challenges faced within the dredging industry have been nominated.

Authors: Luca Sittoni
CEDA’s Working Group on Beneficial Use aims to inspire sediment stakeholders and practitioners by describing the importance of sediments in the context of sustainable development and sharing a curated selection of case studies.
Read more 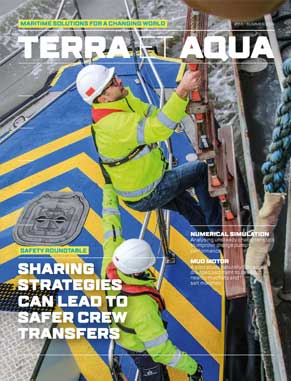 Should the dredging industry establish common standards for crew transfers?

‘What will “sustainability” be in ten years? Our industry needs to be prepared for that.’ Luc Vandenbulcke kicked off 2019 in his new role as CEO of DEME Group. After 21 years working within the group, with 14 of those years starting up, leading and growing the group’s offshore subsidiary, he is now heading the company’s future as it navigates the evolving processes of sustainability.

Authors: Cao Lei | Wang Zheng-wei | Zheng Lin-zhu
The head of a dredge pump is an important performance parameter and a strongly fluctuating head may affect the operating stability of the pump unit. The IADC Young Author’s Award paper analyses unsteady characteristics of pump performance to improve control of the dredge pump.
Read more 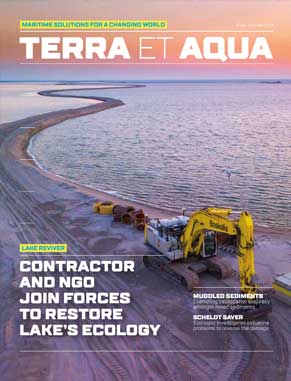 Can a lake’s ecology be restored with unwanted sediment?

Interview Patrick Meire – ‘We must try to use the best of the science to manage the environment.’

Authors: Patrick Meire
Ecologist Patrick Meire has been researching the Scheldt for decades in the hope of implementing solutions which undo the damage caused by humans, industry and natural processes.

Fehmarnbelt: A green link between Germany and Denmark 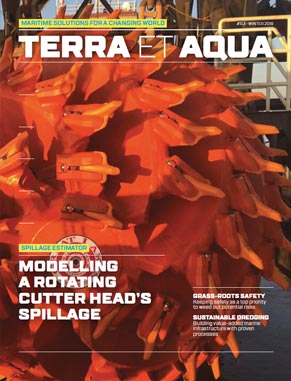 Can a preliminary model describe CSD spillage due to centrifugal advection?

Authors: Alden Louis | Bas Nieuwboer | Jeroen Werkhoven | Robert Ramsdell | Sape Miedema
Depending on its size and installed power, a Cutter Suction Dredger is capable of cutting a wide range of soil types. Although precise and relatively efficient, a CSD can spill significantly. The authors propose a preliminary model which describes spillage due to centrifugal advection.

Authors: Ewout van Duursen
For several decades, the preferred solution for isolating dredging pumps within a vessel has been double-walled pump housing. To bypass this housing type’s intrinsic problems, Damen formulated an alternative.

What happens when individuals step up safety during dredging activities?

By viewing routine processes and situations through a continuous lens of safety, individuals can help make operational processes on water or land safer. Eight solutions nominated for IADC’s Safety Award demonstrate the benefit of this approach.
Read more 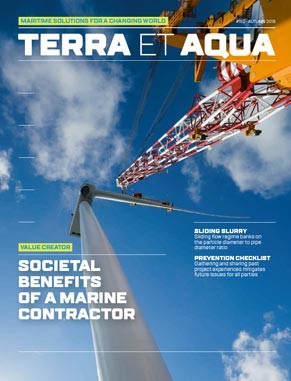 What value does a marine contractor create for its stakeholders?

Interview: Mark van Koningsveld ‘If you focus on primary objectives only, then you will pay in sustainability’

Can a project checklist lead to successful dredging management?

Authors: Ir. Kathleen De Wit
A recurring situation observed during the course of a project: the same issues which arise are experienced differently by different parties. A commission was founded to determine the reason and if possible, propose a solution.

Which slurry transport regime should be used and why?

Authors: Sape Miedema
With five possible flow regimes to choose from for slurry transport, selecting just one can require consideration. Fortunately, one of these regimes has a simple criterion: a ratio of the particle diameter to the pipe diameter.
Read more 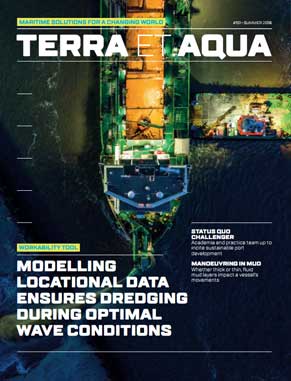 Interview: Tiedo Vellinga – ‘There should be a shift in the way of thinking about designing infrastructure’

Authors: Tiedo Vellinga
A newly appointed Professor Emeritus at TU Delft and former project manager at the Port of Rotterdam Authority, Tiedo Vellinga discusses his role as a bridge between academia and practice and its impact on the direction of port development.

How navigable are fluid mud layers?

Authors: Dr Alex Kirichek | Dr Claire Chassagne | Han Winterwerp | Tiedo Vellinga
Safe navigation through ports and waterways is determined by the space available under a ship's keel, but a seabed of fluid mud can get in the way.
Read more