IADC presents a series of interactive free webinars with experts from the dredging sector. Topics discussed are all based on high-profile projects.

For each webinar, we invite an expert to speak on a particular topic, which will include ample opportunity for participants to ask questions. Mike van der Vijver will moderate the webinars and interview the experts. All webinars will be given in English. Each webinar will focus on a high-profile dredging project and the expert will explain how they dealt with the chosen topic, what lessons have been learnt and what advice they can give.

Dates and topics of the first three webinars:

In this session, Alkwin Landewee of Boskalis will take you to Manila in the Philippines where the large dredging contractors tendered for a reclamation project.

To make a project like this successful, survey and site investigation are essential. What is involved to do this properly? Think of permits, weather conditions and what kind of equipment you need. How do you convince a client that survey and site investigation are the key to a successful execution of the project? These are just a few of the topics that will be covered in this live webinar. 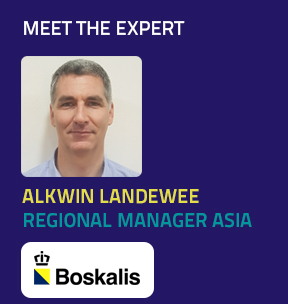 Alkwin Landewee, Regional Manager, Boskalis International is a Bachelor of Science in Land and Water Management with over 20 years’ experience in the dredging and land reclamation industry. After climbing up the ranks working on projects during the first 10 years of his career with Boskalis, he has held general management positions in Mexico, Nigeria and Singapore since 2011. Currently in his role as Regional Manager for Boskalis in Singapore, he is responsible for the commercial and operational activities in Asia.

About the project: Manila Bay, The Philippines

The project involves the reclamation of approximately 360 hectares through the construction of three artificial islands according to international standards to ensure a safe living environment. The islands have been designed to withstand potential large earthquakes. In addition, shore protection works are designed to withstand typhoons.

The importance of managing financial risks in a dredging project

In this webinar, the topic of managing financial risks will be linked to the Brisbane Airport dredging and reclamation project. For any contractor operating worldwide, the exposure to fluctuations between ‘home’ currency and the ‘contract’ currency is a clear and present danger. If this issue is not addressed when negotiating a contract, it could have a rather large impact on the bottom line of your project. The same can be said about the price of fuel. The amount of money spent on fuel is quite large and the price of this commodity can also vary rapidly. So, again the bottom line of your project outcome can be heavily influenced by an increase in the cost of this commodity.

Yves Bosteels of Jan De Nul Group will explain how these two parameters impacted the project’s budget estimate and what a company can do to protect itself against the negative effects of such fluctuations. Questions such as ‘Why is currency a risk and when exactly?’ and ‘What can you do to protect against this risk?’ will be addressed. The webinar is not aimed at making you a financial expert in this field. It will however, allow you to appreciate the gravity and to understand the contractual stipulations that can help you deal with it. 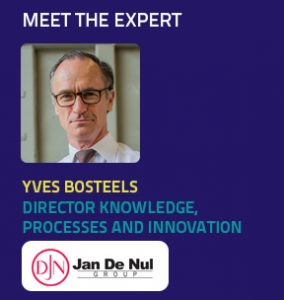 Yves Bosteels, Director Knowledge, Processes and Innovation at Jan De Nul Group has been working for the company since 1994 and spent the first 11 years working abroad, predominantly in Southeast Asia. From 2005–2016, Yves was Area Manager for part of SE Asia, Australia and the Pacific Rim. Since 2016, he leads Jan De Nul’s Knowledge, Processes and Innovation team. In this function, Yves is also responsible for the Jan De Nul Academy.

About the project: Brisbane Airport

The project involved the reclamation of a 360 hectare platform on a marshland. The platform is now home to the parallel runway of Brisbane Airport and was inaugurated in July 2020. The project was a design and build contract, and had a construction period of 18 months. In total, some 11 million m³ of sand had to be reclaimed over distances that varied from 4–8 km. The works were tightly controlled by the client on three main levels: protection of the environment, the quality of the reclaimed platform and working in and around an operational airfield.

The importance of sustainability in dredging.

In this webinar, the topic of sustainability in dredging will be linked to the Saly Coastal Protection Project in Senegal. Saly Portudal is one of the coastal communities worldwide suffering from sea-level rise and the other negative effects of accelerated climate change. The project, which encompasses the touristic area of Saly, aims to protect people, houses, economic and cultural infrastructure in the region against coastal erosion. After the beaches started to disappear at the end of the nineties, the largest tour operator in the Senegalese village departed and hotel room prices fell. As the number of tourists dwindled, so did the household incomes of Saly Portudal’s many local craftsmen. Van Oord was called in to reinforce and revitalise the coastline. Maarten Meeder and Joffrey Cary of Van Oord will explain the biggest challenges and impact on the environment during the execution of the project as well as how Van Oord implemented sustainability in this project.

The project consisted of the construction of 12 detached parallel breakwaters and a number of small groynes. After construction of the breakwaters and groynes, the beach was nourished with approximately 600.000 m3 of sand. The rocks were sourced from a local quarry and installed using dry earth moving equipment. The sand was dredged in an offshore borrow area with the trailing suction hopper dredger Dravo Costa Dorada and pumped ashore through a 2.5-kilometre-long floating pipeline. 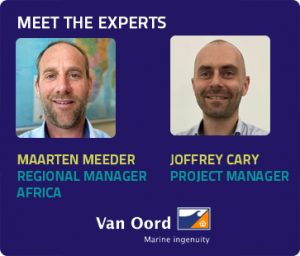 Maarten Meeder is Regional Manager Africa for Van Oord. 48 years young, he is always looking for new challenges and loves travelling. Maarten has more than 20 years of experience in the dredging industry, many of those years spent working in Africa, including Ghana, South Africa and Nigeria. Maarten has a strong connection with the ocean, living a stone’s throw away from the coastline and is a fanatic kite surfer.

Joffrey Cary is a Project Manager at Van Oord. He joined the company 14 years ago after having worked in road construction for a number of years. He is 36 years old and from France. Joffrey has worked on all continents and most recently led the Saly Coastal Protection Project. Sticking to his personal principles in his daily work is very important to him. Even outside working hours, he is always busy starting new projects: he always finds a wall to tear down and then build something better.

About the project: The coastline of Saly

This Senegalese town used to be a popular tourist destination in Africa until the natural forces of the Atlantic Ocean, driven by climate change, washed away its sandy beaches. Saly is the beating heart of the Senegalese tourist industry on the Petite Côte. Tourism is the main source of income for its 20,000 inhabitants. Over the past few decades, however, beach erosion has driven away the tourists. Hotels have shut down and corresponding revenues disappeared, with disastrous economic consequences. In addition to the forces of nature, human interventions have also weakened the coastal defence, such as the construction of a small craft harbour and groynes upstream of the beaches, disturbing the longshore sand transport and deposit downstream along Saly’s coast. Van Oord was called in to reinforce and revitalise the coastline. 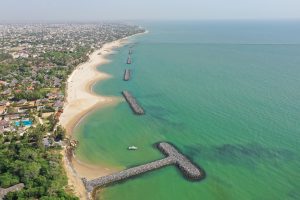 To revitalise Saly’s fragile local economy and prevent flood damage, the World Bank financed a coastal protection scheme. Van Oord was selected to build groynes and detached breakwaters over a distance of 4.5 kilometres. These structures stop the currents and waves from battering the coastline and help to protect the land against rising sea levels.

Van Oord also restored Saly’s golden beaches, deploying trailing suction hopper dredger Dravo Costa Dorada to dredge and deposit some 550,000 cubic metres of sand for a brand-new coastline. ‘We contracted a quarry nearby to deliver more than 300,000 tonnes of rock for the marine structures. The local economy benefited from this way of working,’ explains Regional Manager Maarten Meeder. ‘We also engaged regional subcontractors.’ The project team was eager to help Saly’s inhabitants make their living environment more sustainable and launched a public information project about plastic litter. ‘We placed rubbish bins at a large state school and talked to 800 schoolchildren about the risks that plastic litter poses to health and the environment. Afterwards, we rolled up our sleeves and collected plastic litter in the bins for recycling.’