Dynamic compaction is a technique used for in-situ densification of granular soil deposits by heavy impact.

This technique primarily involves dropping a heavy weight repeatedly on the ground surface at a regular grid of impact points. Compaction of the fill or subsoil is achieved by a re-arrangement of the grains as a result of the shear strains induced by the impact of the heavy drop weight. Physical displacement of particles and, to a lesser extent, low-frequency excitation will reduce the void ratio and increase the relative density. The stress waves generated by the weight contribute to the densification process. The effectiveness of the method decreases with increasing compressibility (or crushability) of the materials to be compacted.

Dynamic Compaction (DC) or Heavy Tamping is mainly used for deep compaction and literally involves dropping a weight (or pounder) that is suspended from a crane onto the ground. The depth of treatment depends on the soil type, the weight of the pounder in tonnes and the drop height in metres.

The drop weight varies from 8 to 35 tonnes and the drop height varies between 7 and 30 metres. The degree of compaction achieved also depends on the grid spacing between the impact points and the number of impacts per location. The maximum depth of treatment may be approximately 12 metres, but will depend on the soil characteristics and operational variables such as drop height, drop weight, number of impacts, and so on. Generally, trials must be undertaken to determine the optimum operational variables.

Dynamic Compaction tends to disturb and loosen the top layers even though it compacts the deeper layers. Often different passes are required to compact the deeper layers with heavy impact on a wide grid, followed by lower impact in a narrower grid to improve layers closer to the surface.

Rapid Impact Compaction (RIC) is a surface compaction technique involving a hydraulic hammer that is dropped on a steel footing placed on the ground surface. The hydraulic hammer is attached to a crane that provides the hydraulics for the hammer. The weight of the hammer ranges between 9 and 18 tonnes, while the diameter of the footing may vary between 1.5 m and 2.5 m. The stroke of the hammer may be adjustable, but the maximum value of the latest generation is limited to approximately 1.5 metres. Impact frequency varies from 40 to 80 impacts per minute. The influence depth may be 6 to 7 metres but will strongly depend on the type of material to be compacted, the soil stratification, the size of the footing, the weight and stroke of the hammer, grid spacing, number of impacts per point, and so on.

Should a second pass be required, this will generally be undertaken on a staggered grid. Productions depend on the requirements and site conditions, but generally range between 1,500-5,000 m2/12 hours. As with other compaction techniques, trials need to be carried out to establish the optimum configuration and dimensions.

High Energy Impact Compaction (HEIC) is used for surface compaction and consists of providing repeated high energy impacts at the ground surface by towed, rotating, cam-shaped, rectangular or pentagonal steel drums of 8 to 16 tonnes in weight from drop heights ranging from 0.15 to 0.25 metres. Although best suited for granular soils, the HEIC method has been effective in clayey sub-grades as well. The optimum towing speed (usually 10 – 12 km/hour), shape and weight of the steel drum and the number of passes must be established by trials on site.

The maximum achievable depth of treatment ranges generally from 1.5 to 2.5 metres. Production rates may be as high as 6000 – 9000 m2/12 hours. Because the magnitude of the impact depends, to a certain extent, on the towing speed, this technique is not useful for irregularly shaped or small reclamation areas. 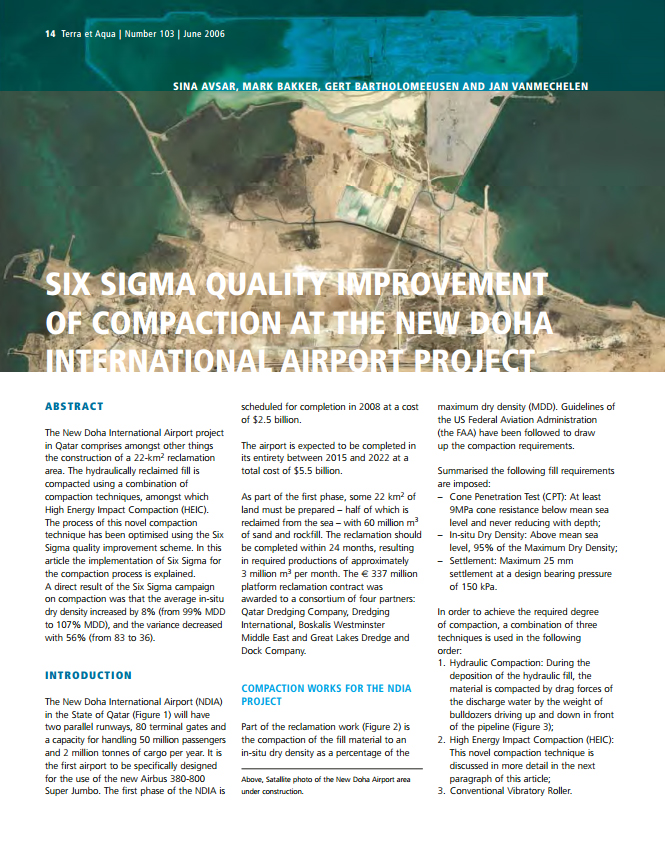 The New Doha International Airport project in Qatar comprises amongst other things the construction of a 22-km2 reclamation area. The hydraulically reclaimed fill is compacted using a combination of compaction techniques, amongst which High Energy Impact Compaction (HEIC).