Financial Institutes and Lending Agencies for the support of emerging nations are organised on a regional basis under the auspices of the World Bank.

Compliance with the London Convention of 1972 and other pertinent international agreements are mandatory for those projects that wish to be financed by international lending organisations such as the World Bank and the Regional and Sub-Regional Banks.

Dredging projects in emerging nations are often dependent on the availability of funds from third parties in the form of lending agencies. A number of possibilities exist, including global, regional, and national lending agencies. Financial support from these agencies is often dependent on adherence to the international and regional conventions that govern the placement of dredged materials at sea. The largest and most widely active of the lending agencies is the World Bank, sometimes referred to as the World Bank Group. It consists of a number of affiliates, namely:

The common objective of these institutions is to help raise the standard of living in developing countries by channelling financial resources from developed countries to the developing world.

International Bank for Reconstruction and Development

IBRD is owned by the governments of 185 countries and makes loans towards developing countries at more advanced stages of economic and social growth. Loans generally have a grace period of five years and are repayable over fifteen years or less and must be guaranteed by the government concerned. The interest rate is calculated in accordance with a guideline related to its cost of borrowing. The Bank’s decision to lend must be based on economic considerations alone, with due regard to the prospects of repayment. Typically, concerning port and waterway development, the loan would be made to the port authority, the port itself or to some parastatal agency responsible for waterways.

IDA has the same objectives as the IBRD but provides assistance concentrated on the very poorest developing countries, and provides terms that would bear less heavily on their balance of payments. About 80 countries are currently eligible. The terms of IDA credits, which are international, regional, and national agencies made only to governments, are ten year grace periods, thirty-five or forty years maturity and no interest. For port and waterway development, the loan would probably be on-lent to the port authority, port or waterway agency at interest rates which reflect the cost of borrowing and with a maturity based on the agency’s financial capabilities.

IFC assists the economic development of developing countries by promoting growth in their private sector economy and by helping to mobilise domestic and foreign capital for this purpose. IFC has, for instance, through equity contribution and other means promoted the development of a number of marine terminals and port facilities mainly associated with industrial activities. Some of these projects have included major dredging works.

MIGA was established to encourage equity investment and other direct investment to developing countries. MIGA offers investors guarantees against non-commercial risks; advises governments on policy and programmes to encourage foreign investments; and sponsors a dialogue between the international business community and host governments on investment issues. It is worth noting that commercial banks and other private financial bodies have become quite interested in port facilities and operations as potential areas for investment. Worldwide most ports are profitable and are also foreign exchange earners and thus are attractive to commercial investors.

A number of regional development agencies have been instituted to serve specific areas of the world. These are:

In addition, there are other multilateral financial institutions (MFIs), such as:

And sub-regional banks, such as:

These banks provide funds for development in their regions in much the same manner as the World Bank.

On a smaller scale, most of the industrialised nations have set up government departments to handle the provision of bilateral aid to a number of targeted countries or regions. The focus of this development assistance is normally affected by historical relationships or current trading patterns. For instance, the British, Dutch and French aid programmes often, but not exclusively, aimed at those countries which were once their colonies. This bias has now shifted to reflect the changing trading arrangements and socio-political aspects of the modern world. In cases of emergencies, such as flooding in Bangladesh, or the tsunami in Southeast Asia, many nations cooperated to bring aid to the hard-hit regions.

It should be noted that country-specific regulations and permitting procedures are updated and change frequently. Therefore, entities considering dredging and marine construction projects are well advised to consult the national, regional and local authorities to ensure that they meet all requirements before embarking on the project.

Export Credits Agencies, known generally as ECAs, are public agencies that provide government-backed loans, guarantees, credits and insurance to private corporations from their home country for investment abroad in emerging economies. These developing countries may be considered high risk for conventional financing and thus may not qualify for conventional commercial investments. ECAs do not need to have a return on the investment but need only cover operating and financing costs. Over 30 industrialised nations have one or more ECAs. The Organisation for Economic Co-operation and Development (OECD) maintains a list of all ECAs per country.

A separate Partnership agreement is in force with Russia. 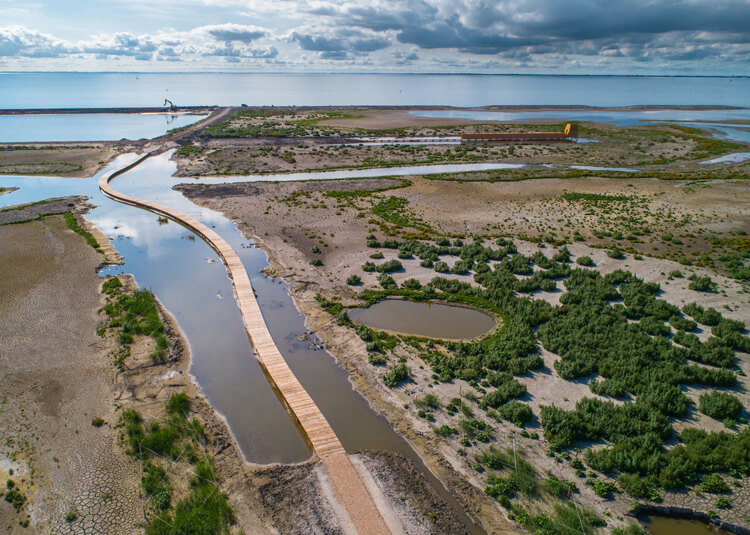 Green solutions in ports, waterways and coastal projects have increasingly become available thanks to many years of research and pioneering efforts in practice. These sustainable and/or nature-based solutions have shown to be good alternatives for classic solutions, but application is far from mainstream yet. One of the major hurdles is the lack of access of private capital to finance these kinds of solutions despite the strong interest of capital markets in green infrastructure opportunities. Identifying the hurdles and paving a way forward to overcome these hurdles could therefore help to increase the uptake of those green solutions. 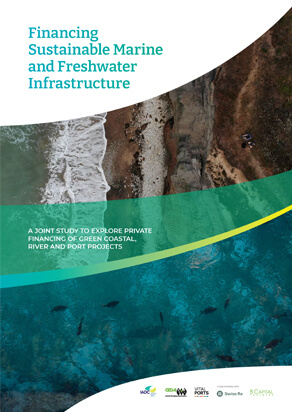 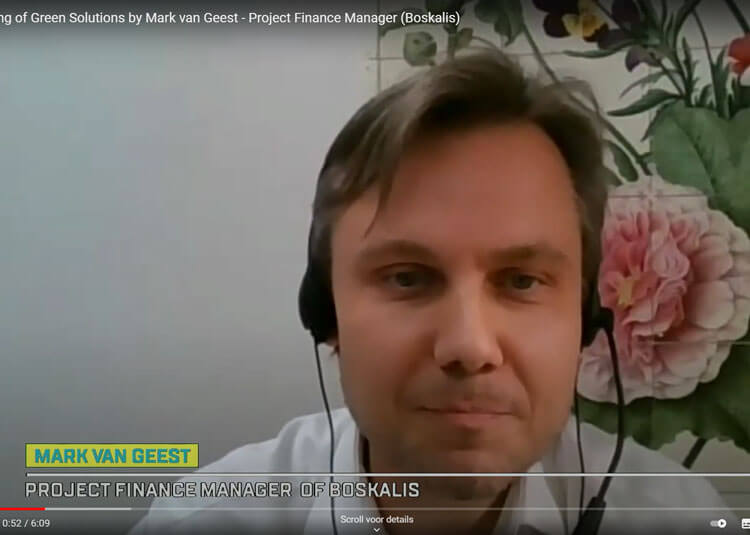 Private capital can accelerate the green transition of sustainable infrastructure solutions, so how can we unlock the private capital potential? 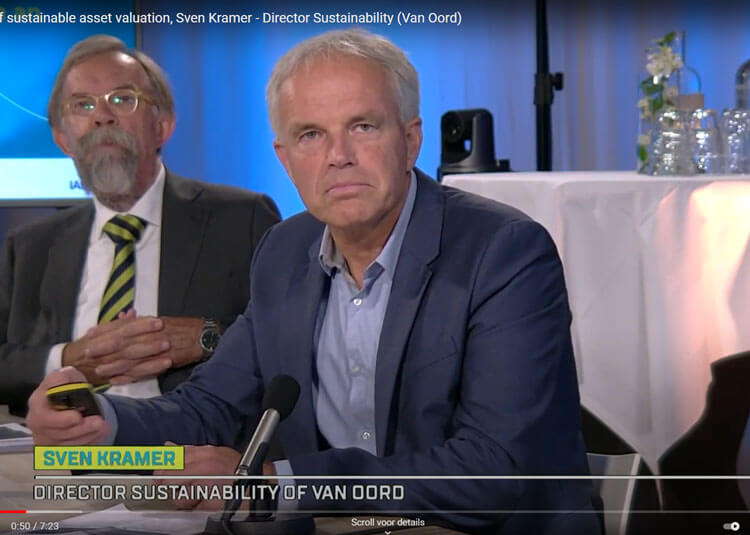 This presentation shows the practical implications of taking all externalities into consideration as early as possible in a project procedure. It is complex but asset valuation is gradually becoming more and more feasible for large infrastructure projects. The independent International Institute of Sustainable Development carried out a study on the benefits of “Nature Based” coastal Protection compared to traditional “Grey” solutions. Their report is expected to be published mid-November 2021.

Presentation: ‘There is ”more” in maritime infrastructure‘ by Marc Huygens (DEME) − Environmental Manager 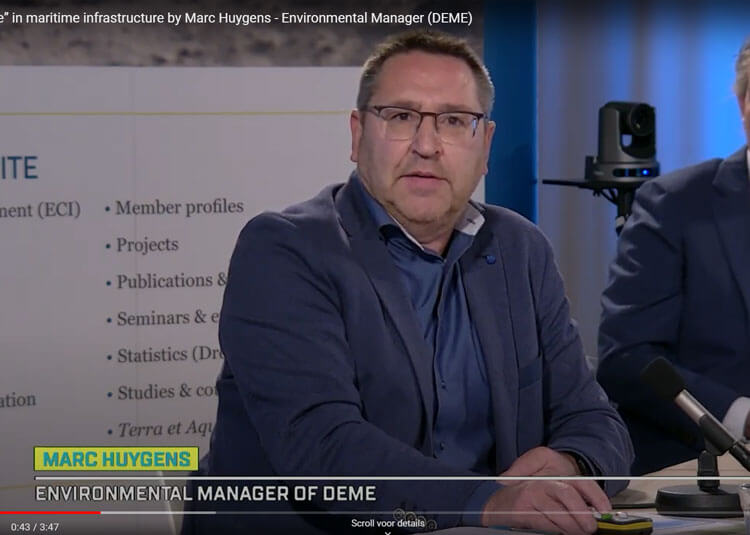 There are opportunities to develop and implement new solutions for maritime infrastructure challenges. In addition to technical-economical values there is a big commitment to create both environmental and social values. To take the industry to the next level it is necessary to attract students and young professionals to the industry to ensure all externalities are taken into consideration from the onset of a project. The “Social Benefits Wheel” is a tool that can help track the degree to which a project or programme is attaining its social development targets and goals.