Wetlands are a natural coastal habitat with unique species of flora and fauna that protect against erosion and flooding of nearby communities.

Although a small percentage of the earth’s surface, wetlands contain important ecosystems that impact human life. They function as regulators of water regimes and water storage and help with flood prevention and natural water treatment. They represent habitats with great biodiversity and help maintain typical submerged water communities in seas, rivers, marshes and lakes. They support many species of birds and mammals, fish, amphibians, shellfish and insects, as their habitat or during migration and breeding season.
Wetlands also contribute to many key economic and social values.
As early as the 1970s scientific awareness of the value of wetlands led to the formation of the Ramsar Convention.

The Ramsar Convention, named after the city of Ramsar in Iran, where the Convention was signed in 1971. It is the first global intergovernmental treaty on conservation and sustainable use of wetlands. It is also known as the Convention on Wetlands.
Almost 90% of United Nations member states, from all the world’s geographic regions, have acceded to become “Contracting Parties” since its inception – an indication of the seriousness with which the world views the protection of wetlands.
The Ramsar Convention defines wetlands as “areas of marsh, fen, peat land or water, whether natural or artificial, permanent or temporary, with water that is static or flowing, fresh, brackish or salt, including areas of marine water the depth of which at low tide does not exceed six metres”.

Wetlands are present all over the world and are typically divided into five types:

The global need for economic expansion along the coast, be it for navigation, port development, residential or recreational uses has put pressure on wetlands everywhere. As much of this marine development involves the dredging industry, the need for research and regulation within the industry has grown.
While governmental and non-governmental agencies continue to establish guidelines for dredging activities near wetlands, the dredging industry has also researched methods of work that ensure an environmental and economic balance.
Situations to consider when working near wetlands include:

With proper planning, dredging can avoid creating these situations. Or where damaged wetlands exist, dredging can be used to remedy the situation. Strategic management of wetland areas is necessary from the start of a port or other maritime project. Prevention of negative impacts or compensation for them is possible.
In areas that have already been impacted, restoration of sand banks and land reclamation can re-establish wetlands and encourage the return of species that have been harmed by development.
In some cases, compensation for lost wetlands can be achieved by the strategic placement of clean dredged material. This dredged sediment can add to the growth of wetlands and help attract bird and animal life back to the area. For instance, using dredged material to create riverine islands has been proven successful.

Wetland restoration planning is similar to other infrastructure planning only more complex. Issues can be hydrological, nautical and ecological. Many stakeholders with different interests add to the need for adequate spatial planning, and attention to environmental and social issues and to legal requirements.
In the past the valuation of wetlands measured against that of economic development was difficult to establish. Nowadays, with the advent of the Ecosystem Services approach, the value of wetlands can be expressed in financial terms and weighed against the value of development. For example, commercial fisheries and recreational facilities are often near wetlands. The destruction or deterioration of wetlands would not only be a loss of habitat and biodiversity, it would also mean the loss of valuable economic assets. 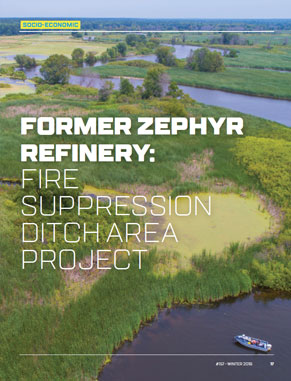 Situated in Muskegon, Michigan, the project provided numerous environmental benefits related to the remediation of legacy sediment contamination as well as restoration of the habitat into a more diverse wetland system. 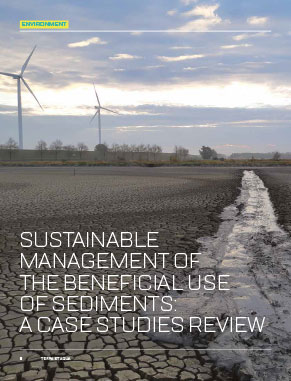 CEDA’s Working Group on Beneficial Use aims to inspire sediment stakeholders and practitioners by describing the importance of sediments in the context of sustainable development and sharing a curated selection of case studies.

Dredged Material as a Resource 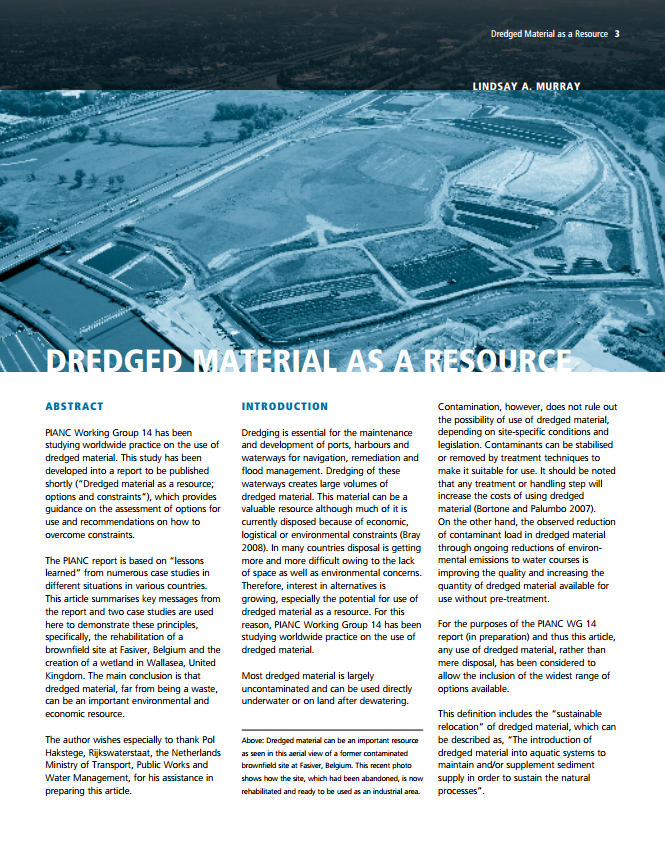 Contrary to conventional wisdom, most dredged material is clean, natural product and, far from being a waste, can be an important environmental and economic resource, as shown in two case studies: the rehabilitation of a brownfield at Fasiver, Belgium and the creation of a wetland in Wallasea, UK.

A Strategy for Wetlands Restoration: Steps Towards Sustainable Development 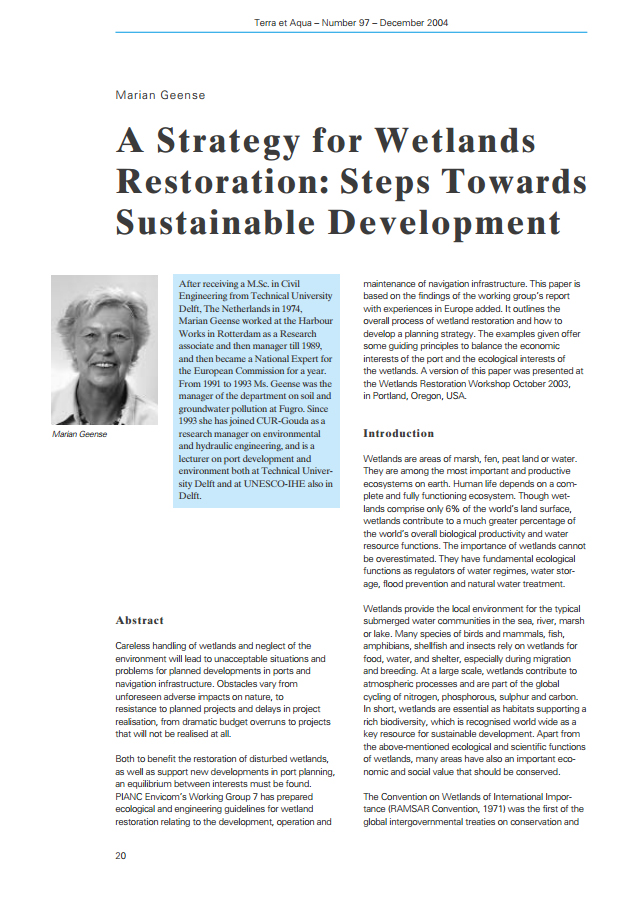 Wetlands are areas of marsh, fen, peat land or water. They are among the most important and productive ecosystems on earth. Human life depends on a complete and fully functioning ecosystem.