Underwater sound created by dredging equipment below the water surface can impact marine life and requires careful evaluation and monitoring.

Why is underwater sound an issue?

Aquatic fauna such as fish and marine mammals often communicate through sound (for instance, the calls of whales) because other means of communication such as visual, touch, smell or taste are rather limited underwater.
As a result, many species of marine fauna communicate via sound – the echolocation of dolphins comes to mind. When any kind of maritime traffic, be it commercial ships or dredging equipment, is present, the possibility for disturbing underwater communication can endanger aquatic life. This disturbance may limit how fish or marine mammals search for prey or avoid being preyed upon, or seek a mate.
To address the impacts of underwater sound is complex and requires studies and monitoring of a number of factors.

Factors of underwater sound to consider

Four important factors need to be considered when determining the impact of underwater sound – the ambient sound, the radiated sound and the sensitivity of the receptor (the marine life). This means:

Understanding whether or not sound impacts from dredging are of concern is difficult to study. The first step is to determine the level of ambient sound. Ambient sound is the sound present in a given marine environment that originates from wind, waves, surf, animal sounds and other sources not related to the dredging project.
Ambient sounds that are present in a busy harbour are quite different than those in the open sea. Establishing these ‘background’ levels of sound will help form a baseline to determine if dredging is having an impact.

Ambient sound is distinguished from radiated sound or acoustic sources, that is, from sound coming from the specific source being studied. In the case of dredging projects these sources are the particular dredgers or equipment being used. The evaluation must also include the activity that the dredger is undertaking.
For instance, radiated sound from a trailing suction hopper dredger comes while it is dredging, while it is transporting sediment and while it is discharging sediment. Three are very distinct operations radiating different sound levels.
Also consider that the sound levels of a dredger varies during sand or rock dredging, during pumping ashore, rainbowing, or bottom discharging of sand. Sound from cutting and placing or disposing of rock is very different from a trailer.
In short: the underwater sound level of each type of dredger during each phases of the dredging cycle must be measured.

The marine fauna present in the areas where dredging activities are taking place are not all alike. And their sensitivity to sound is also not the same.
A thorough study needs to evaluate the sound sensitivity of specific species in the work area. Questions to be considered are:

Since most marine mammals and fish are on the move and not stationary, measurements are difficult to establish. Indeed the fact that some species do not remain in a specific underwater site for long may also mitigate the effects of sound disturbances. On the other hand, for species that live near a port or river where they nest or do not migrate may result in more hearing impairment.

Underwater sound is recorded by hydrophones, which are underwater microphones. Hydrophones measure things such as Sound Pressure Level (SPL) and Sound Exposure Level (SEL), which reflect the total amount of sound that an animal receives over a specific length of time.
The effects of the reflections at the water surface and at the seabed as well as the varying speeds of sound at different water depths (deeper vs shallow waters) again makes measuring very complicated.

Underwater sound levels and their impacts demand specific expertise and modelling skills. In most cases, independent assessors will be employed to establish a baseline levels of ambient sound, before an operation begins. Predictive modelling may also occur. During the operation these measurements and the modelling results will be examined and compared. Should sound levels exceed those stipulated by authorities and permits, work methods need to be evaluated and other methods may be considered.

In general, to fulfil the expectations of an Environmental Impact Assessment, underwater sound during all the different phases of the dredging cycle must be monitored. These data are then compared with background sound and other sources of sound. And finally sound levels must be evaluated in terms of their potential effect on the specific marine fauna.
Ultimately, the aim of evaluating underwater sound, as with all environmental monitoring, is to ensure a balance between the environmental impacts and socio-economic benefits of the dredging project. Underwater sound should also be examined in the context of ecosystem services. 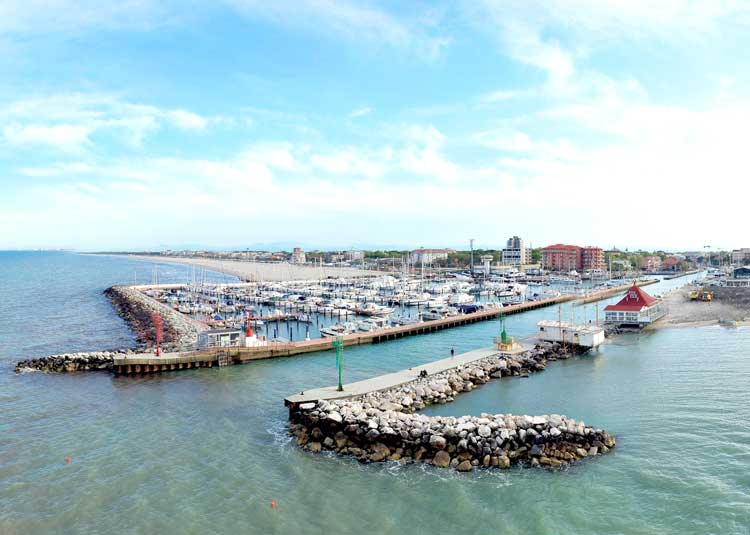 In June 2019, the research team of the LIFE MARINAPLAN PLUS project began operating the first-of-a-kind demonstration plant installation at the harbour entrance of Marina di Cervia (Italy). Fulfilling the project’s objective to apply at industrial scale a reliable technology for the sustainable management of sediment in marine infrastructures, this technology prevents harbour silting through the use of submerged devices called ‘ejectors’ installed on the seabed. 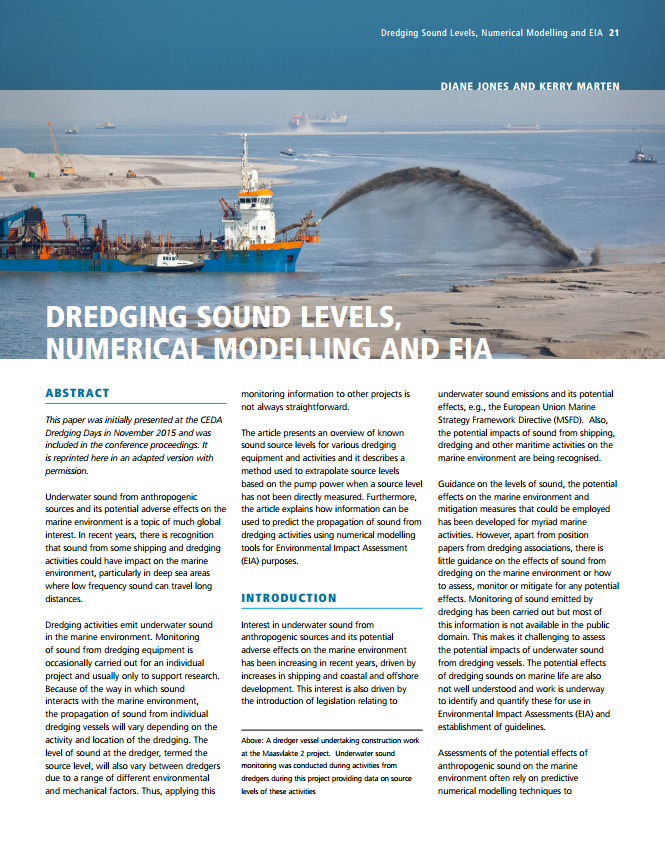 Underwater sound from anthropogenic sources and its potential adverse effects on the marine environment is a topic of much global interest. This article gives an overview of known sound source levels for various dredging equipment and activities and describes a method used to extrapolate source levels. 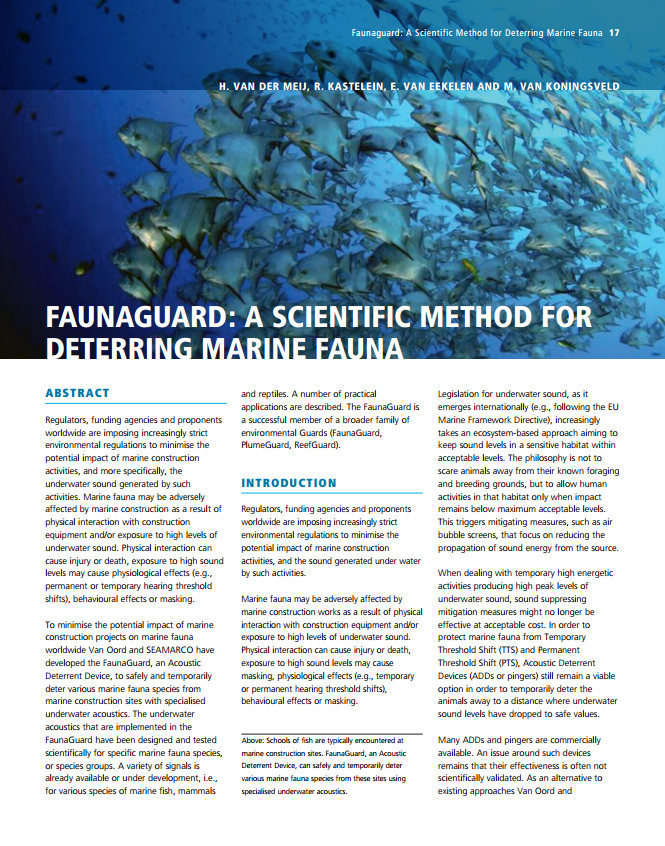 Marine fauna is sensitive to underwater dredging sounds. Scientific research indicates that inducing the fauna to leave an area temporarily before the start of a project minimises serious impacts. And the marine life returns when the dredging is finished.

Monitoring Programme for the Maasvlakte 2, Part III – The Effects of Underwater Sound 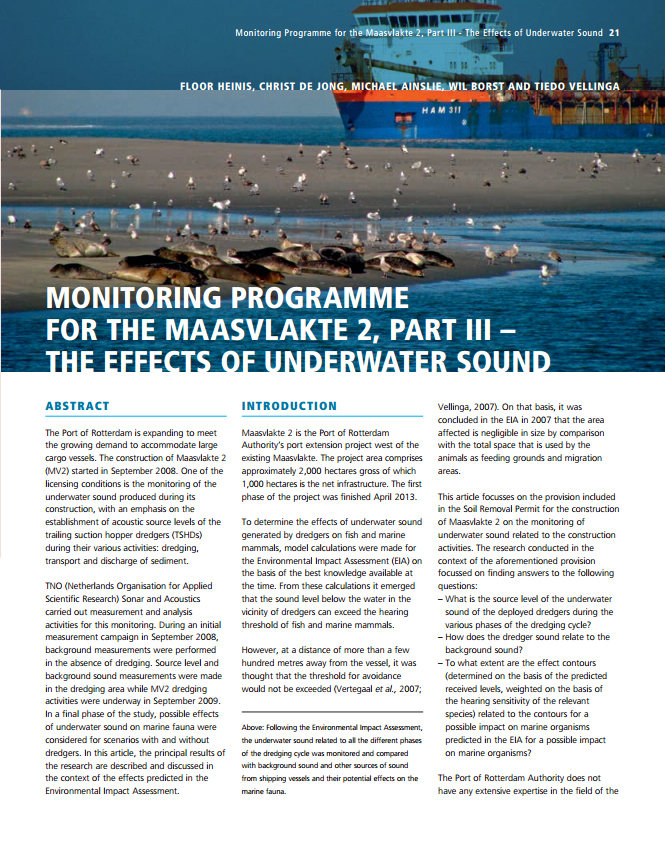 TNO’s acoustic surveys of dredgers during all phases of the dredging cycle showed that permanent hearing threshold shift was not exceeded in any cases studied or in any species in question. 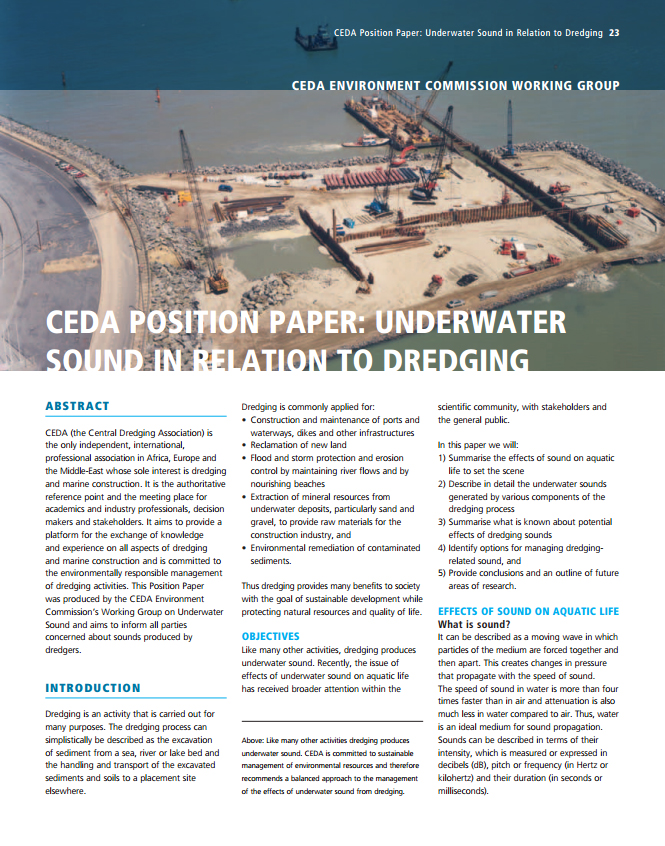 The sea is full of fish and aquatic mammals “talking” to each other. Do the sounds of dredging disturb this communication?