CO2 and other emissions / Greenhouse Gases – including from dredging equipment – must be controlled to help mitigate climate change, which requires innovative research.

The Intergovernmental Panel on Climate Change (IPCC), a United Nations scientific intergovernmental body established 25 years ago, has reaffirmed that climate change is brought on by human activity and is heating up the planet at an untenable rate and “it is extremely likely that human influence has been the dominant cause of the observed warming since the mid-20th century”. One of these “human influences” is the use of fossil fuels and their emissions. This includes CO2, SOx, NOx and others.

While nations are responsible for emissions within their own borders, emissions from international shipping are not bound to one country. Ships move across vast bodies of water. Consequently, the International Maritime Organization (IMO), also an UN agency, has developed legislation addressing the reduction of greenhouse gases caused by fuel emissions. Since emissions vary from one type of ship to another, this is a complex issue. Freight ships, for instance, differ from dredging vessels even if some dredgers are self-propelled and sea-going.

Globally, a progressive reduction in emissions of SOx and Particulate Matter (PM) and the introduction of Emission Control Areas (ECAs) have been gradually enacted. As of January 1, 2015, new limitations on SOx were put in place for parts of the North Sea and the California coast.
Other regulations regarding fuel efficiency and carbon reduction are being put in place by the IMO and the European Union.

The dredging industry is working on multiple methods to achieve sustainable growth by improving energy efficiency with regard to emissions. These include: 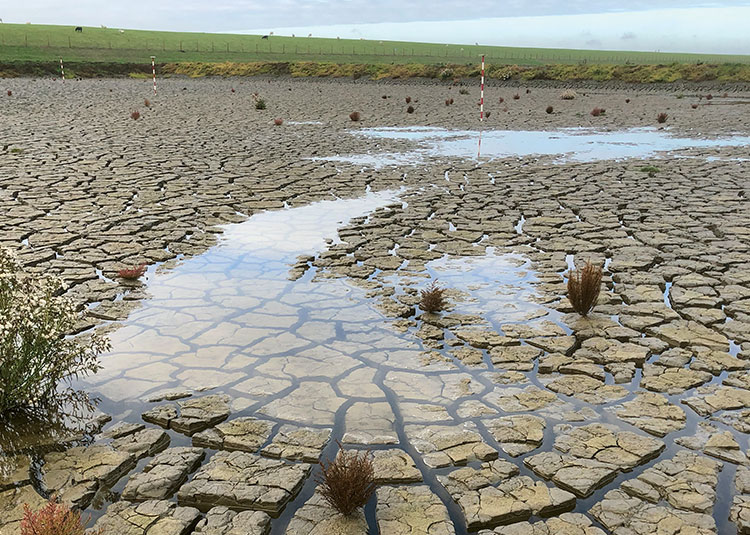 As increasing greenhouse gas (GHG) emissions contribute to global warming, it is becoming more important to consider the carbon footprint of hydraulic engineering projects. This carbon footprint is more complex than previously thought however, as it can also include the carbon dynamics of the sediments from which projects are built. The purpose of this study was to provide a first approximation from sediment-related GHG emissions of dredged sediments. Using the case study of the clay ripening pilot project (‘Kleirijperij’) in Groningen, the Netherlands, one phase of sediment processing was examined: the ripening of dredged sediments for use as a clay material in dyke construction. 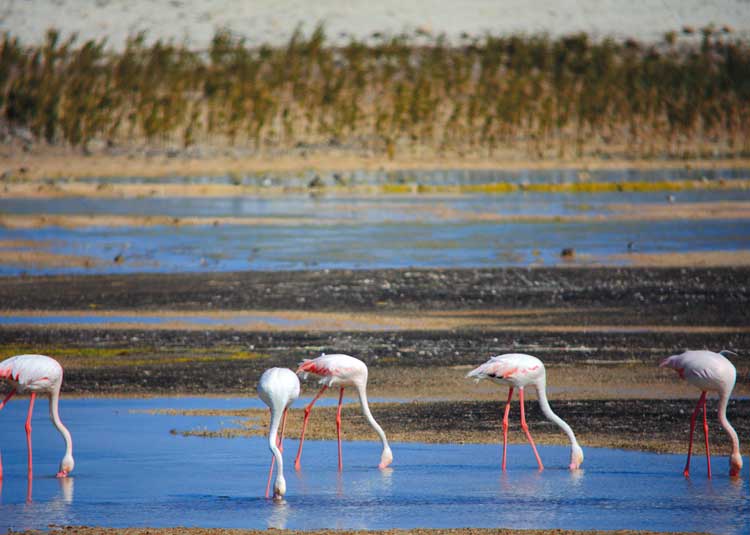 Over the past decades, there has been a growing interest in exploring innovative ways to minimise the environmental footprint of coastal developments and in nature-based approaches for shoreline protection. At Mubarraz Island near Abu Dhabi (UAE), an international oil company beneficially reused ~12 million m³ of dredged material to protect pipelines, construct a causeway and create mangrove habitat to manage coastal erosion. This ‘Working with Nature’ approach has provided a cost-effective nature-based solution for shoreline protection, with added benefits for biodiversity conservation. 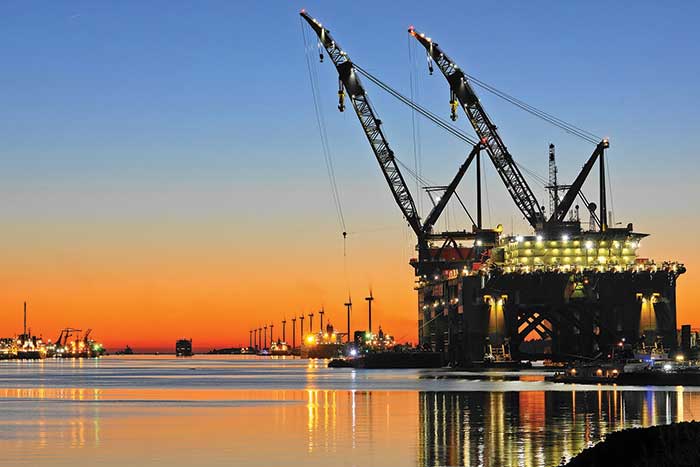 As regular maintenance and relocation of sediment deposits are highly expensive, Port authorities seek more efficient solutions for reducing the costs and CO2 emissions of maintenance dredging. One solution, water injection dredging (WID), is carried out for maintaining the sediment deposits which predominantly consist of clay and silt. WID has been proven to be a cheaper solution by leaving the sediment in place, eliminating substantial costs for relocation of the dredged sediment.

Towards a Green Maritime Technology 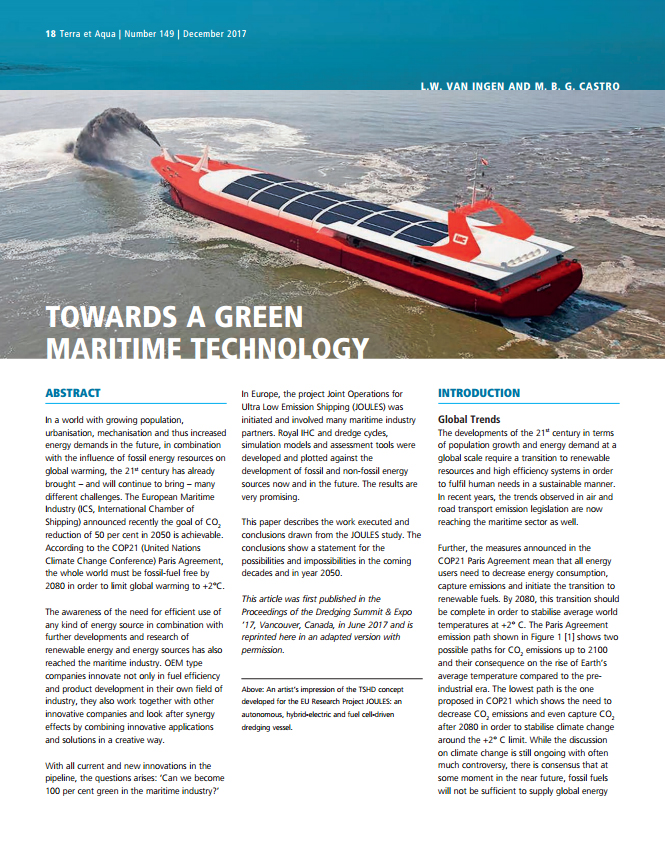 The growing awareness of the need for diversified energy sources has collided with the maritime industry. Research initiative JOULES was created to assess the viability of a vessel being 100 per cent green by increasing efficiency and reducing emissions. 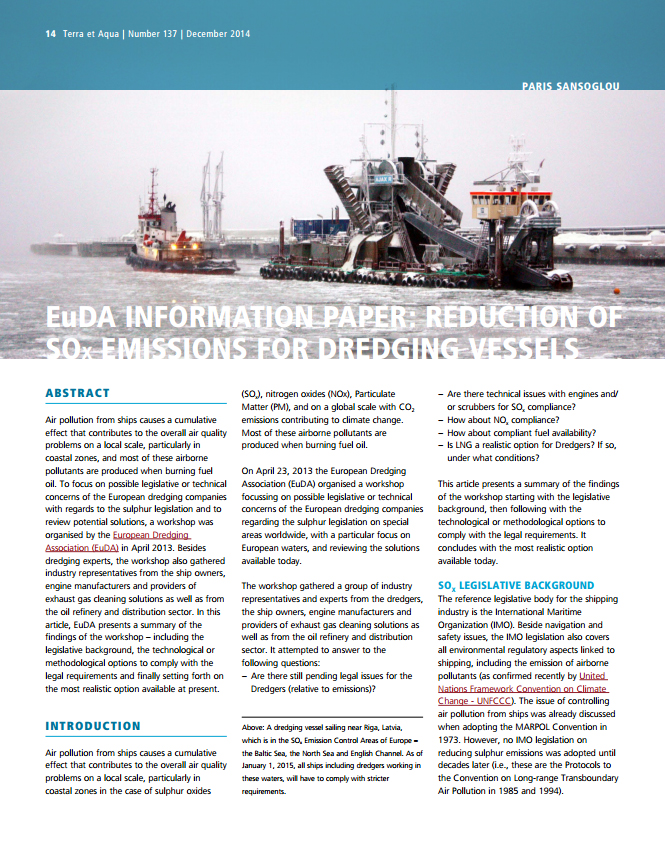 New IMO emissions regulations are being adopted each year. But dredging vessels are more than ships. They are work-boats and legislators must keep that in mind. 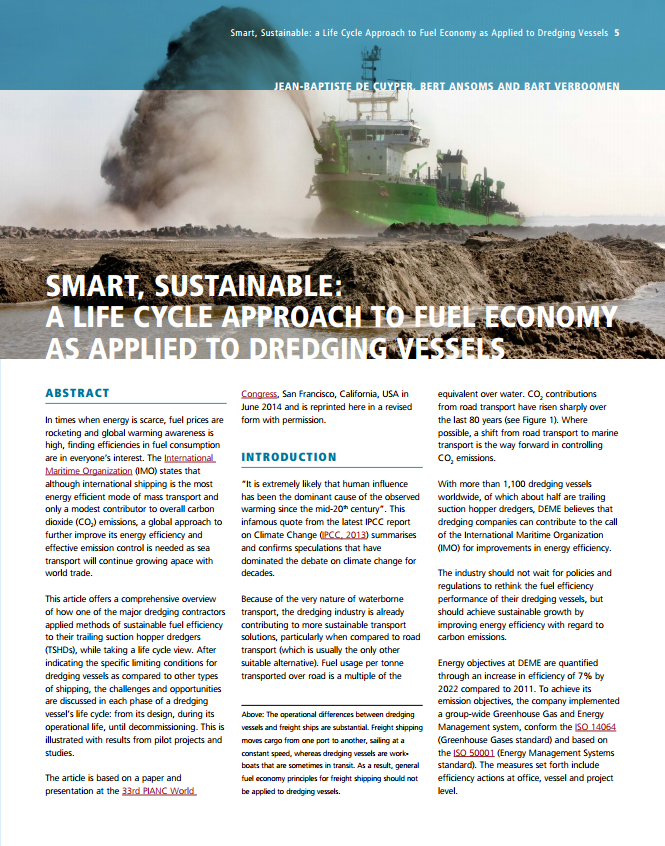 No time to wait for policymakers. Dredging contractors need to act now and consider energy efficiency from beginning to end: from ship design to operations to decommissioning. 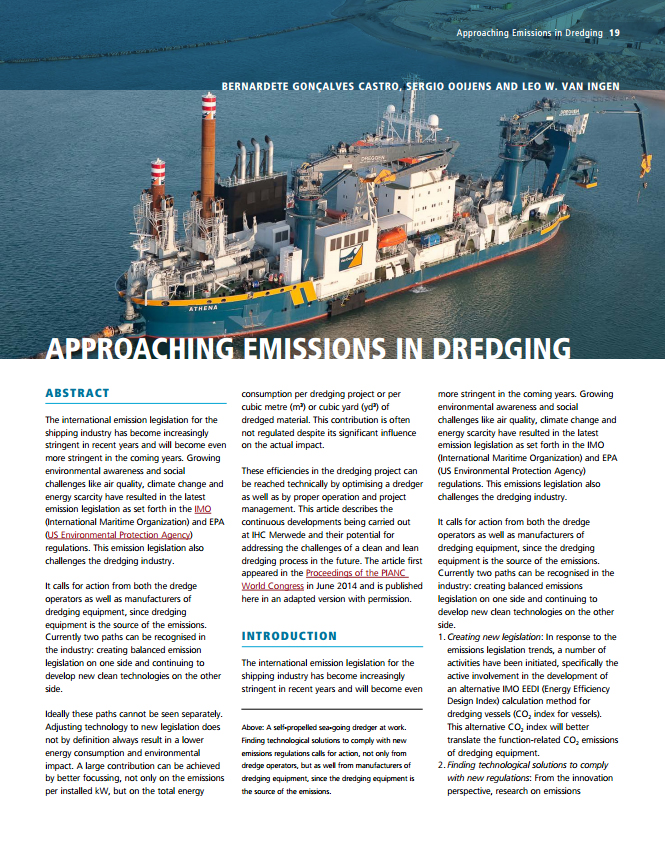 Since dredging equipment is the source of emissions, shipbuilders and equipment manufacturers must help develop clean technologies that address total energy consumption. 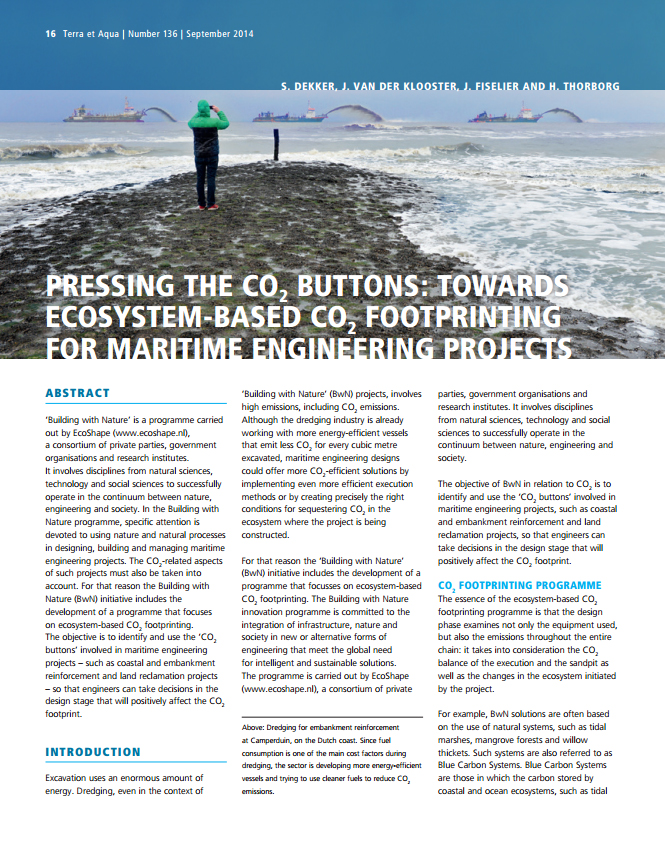 Reducing the carbon footprint of dredging operations is a major industry concern – and the solution starts with the design phase and continues through the whole lifecycle.